An illegal immigrant mother & wife in Georgia, who the police believe fatally stabbed four of her children and her husband was charged with five counts of murder on Thursday. A fifth child had serious injuries. The woman, Isabel Martinez, 33, was discovered with the bodies of her family members inside a home in Loganville, Ga., a small city about 35 miles east of Atlanta, the Gwinnett County Sheriff’s Office said in a statement.

In addition to the five counts of murder, Ms. Martinez was also charged with five counts of “malice murder” and six counts of aggravated assault. She is being held without bond, the sheriff’s office said. She was also being held for Immigration and Customs Enforcement, officials said.

The mother/wife has been charged. The children were ages 2-10. The male was 33 years old. The injured 9yr old is in stable condition at hosp pic.twitter.com/JPXFRa81hD

The authorities did not offer any clues as to a motive, though neighbors told The Atlanta Journal-Constitution that the woman’s father had died recently.

“What prompts a person to take the life of such innocent children and her spouse is something we may never understand,” the Gwinnett County police said in a statement. “This is a horrendous crime not only for the victims but for the extended family, neighborhood and community.”

Ms. Martinez told the police that she and her husband, Martin Romero, 33, were parents to the children, according to the sheriff’s statement. Late Thursday night the police identified the children who were killed as: Isabela Martinez, 10; Dacota Romero, 7; Dillan Romero, 4; Axel Romero, 2. The fifth child, Diana Romero, 9, was in serious but stable condition at a hospital.

Surviving illegal immigrant family members have set up a Go Fund Me, asking Americans to give them more money than the welfare they already have been leeching off of the government from:

We may finally have a detained illegal where the liberal democrat trash will not be able to secure her release & hide her in one of the numerous sanctuary cities that are harboring millions of violent, law-breaking illegal immigrant gang members & others.

Next time the liberal media throws a sob story on TV about criminal mothers & their anchor baby children hiding & crying in a church to obstruct the law & prevent being detained by ICE, remember, what evil hides in: We share a border with an evil lawless country that displays hanging bodies & bloody heads thrown on the side of the roads DAILY. Illegal immigrants bring these traumatizing, way of life accepting visuals that they have been accustomed to living with, into America, & like this psycho mother, are a risk to act out one day. They are all ticking time bombs. This is violence in America that should not be tolerated. We have enough from Americans. 1 from an illegal immigrant is 1 too many. All illegal immigrants must be deported. Excuses & tolerating trespassing, welfare abuse, & the sick evil wasteland that they come from is a danger to our safety & freedom. 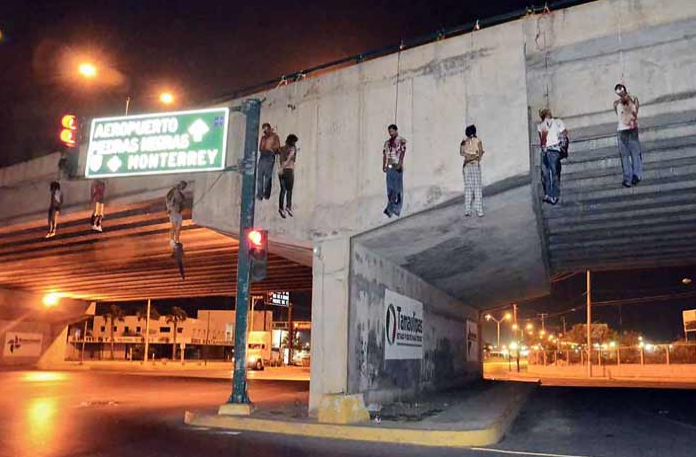 This is Mexico. Just miles from America’s border this savage evil occurs daily. Where journalists & reporters are killed weekly. Illegal immigrants are bringing this here in their traumatic experiences, & today, Isabel Martinez was like a cartel member from her homeland & stabbed her entire family to death. 1 crime from illegal immigrants is 1 too many.